I have chosen this blog as my best critical blog for this course.  I believe it provides an accurate representation of what occurs in the novel, and highlights some ambiguities and metaphors which are cleverly used by David Malouf. By the way, David wouldn’t speculate on the ending of the book either. This is after all, a fiction book, isn’t it? 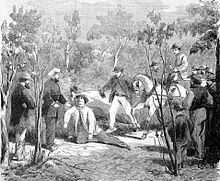 Conversations at Curlow Creek is a novel set in the early days of the colony of NSW by David Malouf. The novel that talks of an officers duties to hang Daniel Carney, a bushranger. Prior to the hanging though, he spends a night in a cottage with the prisoner. The novel is of the conversations between the two.

The Officer, Adair, is of two minds. It is not only a moral paradox that he has but a personal one. Adair has come to Australia not merely to be a trooper, but to find his lost step-brother, who has reportedly become a bushranger in NSW. It seems that the head of the bushranger gang  that the condemned man was a part of, could possibly be Fergus, the lost sibling; although the name being used by the leader was Dolan.

No conclusion is reached about the true identity of the gang leader. Adair had not resolved the matter. At the same time, the enemy had become known, and perhaps loved.  Adair and Carney have many parallels in their lives. Both grew up in Ireland and both were orphans.  The difference comes in the opportunities presented to Adair as a boy. he was taken in by a friend of the mother, whom he had never known, and educated by a landowner who took an interest in the lad.

So it is that Adair builds a rapport with Carney. It is with a heavy heart that he must carry out his duties to hang the man. He allows him to wash in the creek, to prepare himself for death, and is reminded of a dream that he has in a moments sleep during the night. He wants the man to feel comfort in his death and provides him with hot tea.

No man can serve two masters, Either you will hate the one and love the other, or you will be devoted to the one and despise the other. You cannot serve both God and money. Adair is in a dilemma. He must remain true to himself, his heritage and do in his heart what is right, or obey those who have employed him and provide his wages.

The last page of the epilogue tells us of Adair breaking and eating bread. This reminded me of the communion celebration in the Catholic church. One is not able to partake of the communion without first seeking reconciliation with God through the forgiveness of sin. Has Adair then forgiven himself for the sin that was committed? Is the sin committed that of taking another’s life, by way of hanging, as was his duty? Or was his supposed sin allowing the escape of Carney, and therefore the sin is against the community and authorities that have hired him to do the job? The issues remain unresolved. I hope to ask the questions of David Malouf when our class meets with him in two weeks time.

3 responses to “A house divided… Conversations at Curlow Creek”