I have chosen this work to be the best of my critical entries on this subject. I took a real interest in Ginsberg before he and his cohorts were discussed in class. I took an in-depth look at “Howl” and tried for myself to decipher some of the parts, and to give extra commentary on them. Alan Ginsberg is someone whom I would like to study further.

Warning: The videos, and some of the text may be considered obscene:

Allen Ginsberg was a poet who bared his mind in the 1950’s. His poem Howl, made him famous, or infamous for it’s somewhat candid and sometimes obscene language and content. 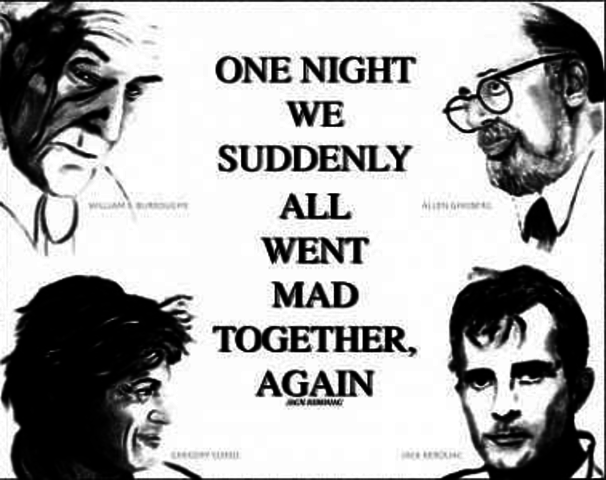 In Part II of Howl, Ginsberg equates capitalist society with the God Moloch, who was a God that the early Hebrews and others sacrificed their children.

“What sphinx of cement and aluminum bashed open their skulls and ate up their brains and imagination?” Ginsberg is saying here that cities, society has taken away any chance of those who inhabit them, of having imagination, of being able to think for themselves,

“Moloch, Moloch, Robot apartments! invisible suburbs! skeleton treasures! blind capitals! demonic industries!spectral nations! invincible madhouses!granite cocks! Monstorous bombs!” Everything is the same with houses, there is no imagination in design. These spaces are there not to be beautiful, but to have a purpose; to fit as many bodies in as little as space as possible. The treasures we build for ourselves and for our companies in this world of corporate greed, do not come without a cost, Many lives are lost, wasted with empty heads, empty brains unable to think for themselves. Invincible madhouses, are invincible because once someone is labelled as mad, that label follows them around, and nothing they say is taken serious from then on, People are defeated. Granite Cocks are the monolithic phallic symbols. Skyscrapers really are a phallic symbol, corporations saying, look how big and powerful am I. And Monstorous bombs refers to actual bombs, nuclear or otherwise that have the capability of destroying millions of lives in one push of a red button.

Why did Ginsberg call his poem Howl? A howl is defined as a mournful cry of perhaps a dog or other animal. Ginsberg may have thought himself a dog, but the emphasis should be placed on the sound, not what makes it. Howl is a mournful cry. Sometimes the cry is made in anger, sometimes in pain, but mostly in a sadness that eats you right to the bones. Ginsberg was expressing the sadness he feels when he think of the world that has lost it’s way. Of a world that has forgotten nature.

Ginsberg reflects on friends left behind, in particular, Carl Solomon, whom he met in a mental asylum and whom remained there as Ginsberg was released. He mentions over and again Rockland, which is a mental asylum but not the one in which Ginsberg met Solomon.

in Footnote, Ginsberg reflects on people and places and things which have influenced his life and his writing. He calls these “Holy”. To him, the people that Ginsberg met and received understanding from, and had an influence in his life, were sacred. People to be revered or idolised.

This is one work that deals with the emotions in such a diverse way. It is a spiritual moment. Once heard, one can never unhear the words in the poem. Once heard, this poem will surely affect your view on socialism, capitalism and what is important to you, and the world.

Genius or madman? Don’t let me or anyone else sway your judgement. Make up your own mind. Its what a true transcendentalist would do.