I attempted to do a modern day journal entry similar to Dorothy Wordsworth Grasmere journals. It describes a short walk I took down to the Turella bridge over the Cooks River.

I realised that I had not really done a creative entry for my 19th Century Literature blog, so I thought I would attempt a modern day Journal entry in the style of Dorothy Wordsworth’s Grasmere Journal.

The nights are getting chilly in this cottage on the hill. The cool evenings however are soon forgotten as I feel the warm sun on my face as I venture out of doors. I decide to turn left on the path through Turella Reserve today and head down towards the Cooks River.

The section of the river I am trekking to today is a little more than a trickle. A weir has been built below the foot bridge to allow the hatchling fish to start life in calmer waters before heading downstream and out to sea; sometimes ending up on the hook of a young angler before reaching deep waters.

It’s not a long walk by any means, but there is much to see and hear, and sometimes I can make a short ten minute walk last over 2 hours as I stop to sketch or take some photographs of the flora and fauna of the area.

The birdlife is quite alive during the day. One can always see some Magpies and Rosellas loitering around the playground, with its seating, barbeque and unguarded garbage bins. They fight for food scraps with the native Ibis, while the kookaburras get ready to sing at the first sign of a cloud. As I wander down the gentle green hill, I spy a Dusky Moorhen and some Cormorants near the reed covered lake. 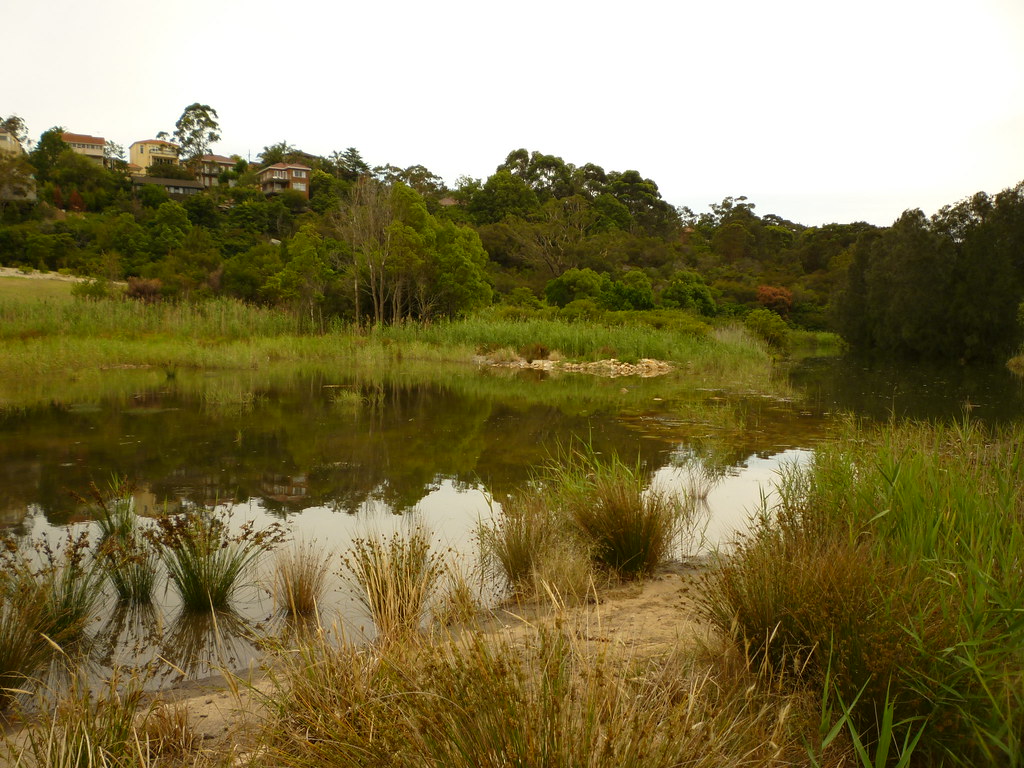 With the weather getting cooler, a lot of the smaller birds have flown north to seek warmer air currents.

On the rolling hill, I spy a few people walking or playing with their dogs. The dogs are not disturbed by the birds, nor are the birds upset by the four legged intruders. Labradors and German Shepherds are too busy fetching balls or Frisbees thrown by their owners. They are easily distracted however by some interesting smells, or noises in the nearby bushland.

On a rocky outcrop I come across a bearded dragon sunning himself. He sits with his head raised majestically, as if trying to smell the sun. I see no wallabies today, although they are not an uncommon visitor to Turella reserve. I do hear some rustling in the bushland, however not seeing anything, I would be speculating to try to identify the noisemakers. At night I have spied ringtail and brushtail possums, foxes, rabbits, and thousands of Grey headed flying foxes can be heard screaming overhead on dusk, and on their return at about 5am each morning.

Flora present on the grasslands is limited to dandelions I’m afraid, however some flowering paperbark trees and small eucalypts are present around the play area. In the bush to my right on the way down the hill, there are a great variety of banksia bushes as well as Sydney Redgum and Turpentine trees.

I walk to the bridge over the trickling brook and look into the deep green of the water. The tide is down revealing some of the moss covered bricks placed along the banks by convicts in the early days of the colony.

Nearby I hear a train coming into the station, and the sound of cars on the other side of the hill. But right now, I listen only to the wind through the trees and the occasional sound of birds among the trees. I am so blessed to be living so close to bushland in the midst of a busy city.