Bailed Up by Tom Roberts 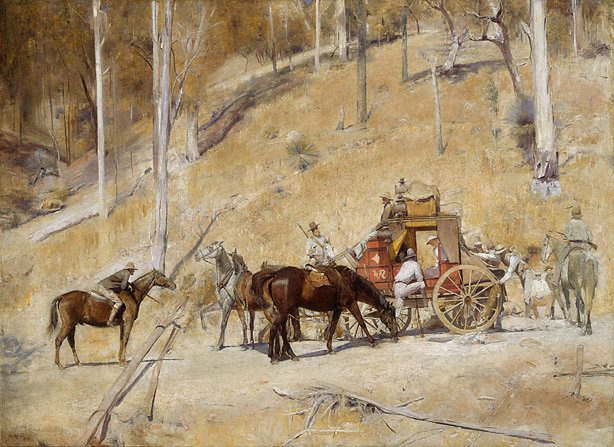 This was one of the paintings that was looked at by my class as they wandered the great halls of the NSW Art Gallery last week.

This painting entitled “Bailed Up”, by Tom Roberts, has been a favorite of mine since 5th grade in primary school. It hung on the white wall outside the deputy principal’s office. I remember sitting there waiting to see him and looking at the painting and wondering about the lives of the people in the painting.

The painting was done ‘plein air ‘ in Inverell in 1895. Tom Roberts used people from the nearby township to act as models so he could paint it. The painting depicted a Cobb and Co stagecoach being held up by Captain Thunderbolt, a local bushranger.  One of the models was an actual stagecoach driver by the name of ‘Silent’ Bob Bates.  This stagecoach driver had actually been held up by Captain Thunderbolt 30 years earlier. One could speculate that Tom Roberts shared a billy of tea with Silent Bob, and asked him about that experience before setting the scene to paint it.

The coach in the painting was typical of the Concord coaches used by Cobb & Co. These were made in America. The suspension used was a belt type, which made long distance travel more comfortable for passengers. The coaches were made for the west in America and were built for rough terrain and high speeds which were needed to avoid raids by Indians and outlaws.

One can see the Royal Mail logo on the side of the coach in the painting. Cobb & Co had the contract for the mail from the 1860’s through to the end of the first world war.

The Cobb & Co coaches were faster than other coaches. Because of that speed, horses had to be changed regularly, and so a whole industry was built around the transport of people and parcels. The horses were bred especially for Cobb &Co. Coach houses were built every 200 miles or so for a quick change of horses and a meal for travelers. Some of the coach houses had accommodation for overnight travelers.

The Cobb & Co coaches became synonymous for a strong willed spirit that kept going through the hard times. Cobb & Co was immortalised through the Tom Roberts painting as well as in literature through poems by Henry Lawson.

The Lights of Cobb & Co

FIRE LIGHTED, on the table a meal for sleepy men,
A lantern in the stable, a jingle now and then;
The mail coach looming darkly by light of moon and star,
The growl of sleepy voices — a candle in the bar.
A stumble in the passage of folk with wits abroad;
A swear-word from a bedroom — the shout of ‘ All aboard!’
‘Tchk-tchk! Git-up!’ ‘Hold fast, there!’ and down the range we go;
Five hundred miles of scattered camps will watch for Cobb and Co.

Old coaching towns already ‘ decaying for their sins,’
Uncounted ‘Half-Way Houses,’ and scores of ‘Ten Mile Inns;’
The riders from the stations by lonely granite peaks;
The black-boy for the shepherds on sheep and cattle creeks;
The roaring camps of Gulgong, and many a ‘Digger’s Rest;’
The diggers on the Lachlan; the huts of Farthest West;
Some twenty thousand exiles who sailed for weal or woe;
The bravest hearts of twenty lands will wait for Cobb and Co.

The morning star has vanished, the frost and fog are gone,
In one of those grand mornings which but on mountains dawn;
A flask of friendly whisky — each other’s hopes we share —
And throw our top-coats open to drink the mountain air.
The roads are rare to travel, and life seems all complete;
The grind of wheels on gravel, the trot of horses’ feet,
The trot, trot, trot and canter, as down the spur we go —
The green sweeps to horizons blue that call for Cobb and Co.

We take a bright girl actress through western dust and damps,
To bear the home-world message, and sing for sinful camps,
To wake the hearts and break them, wild hearts that hope and ache —
(Ah! when she thinks of those days her own must nearly break!)
Five miles this side the gold-field, a loud, triumphant shout:
Five hundred cheering diggers have snatched the horses out:
With ‘Auld Lang Syne’ in chorus through roaring camps they go —
That cheer for her, and cheer for Home, and cheer for Cobb and Co.

Three lamps above the ridges and gorges dark and deep,
A flash on sandstone cuttings where sheer the sidings sweep,
A flash on shrouded waggons, on water ghastly white;
Weird bush and scattered remnants of rushes in the night
Across the swollen river a flash beyond the ford:
‘Ride hard to warn the driver! He’s drunk or mad, good Lord!’
But on the bank to westward a broad, triumphant glow —
A hundred miles shall see to-night the lights of Cobb and Co.!

Swift scramble up the siding where teams climb inch by inch;
Pause, bird-like, on the summit — then breakneck down the pinch
Past haunted half-way houses — where convicts made the bricks —
Scrub-yards and new bark shanties, we dash with five and six —
By clear, ridge-country rivers, and gaps where tracks run high,
Where waits the lonely horseman, cut clear against the sky;
Through stringy-bark and blue-gum, and box and pine we go;
New camps are stretching ‘cross the plains the routes of Cobb and Co.

Throw down the reins, old driver — there’s no one left to shout;
The ruined inn’s survivor must take the horses out.
A poor old coach hereafter! — we’re lost to all such things —
No bursts of songs or laughter shall shake your leathern springs
When creeping in unnoticed by railway sidings drear,
Or left in yards for lumber, decaying with the year —
Oh, who’ll think how in those days when distant fields were broad
You raced across the Lachlan side with twenty-five on board.

Not all the ships that sail away since Roaring Days are done —
Not all the boats that steam from port, nor all the trains that run,
Shall take such hopes and loyal hearts — for men shall never know
Such days as when the Royal Mail was run by Cobb and Co.
The ‘greyhounds’ race across the sea, the ‘special’ cleaves the haze,
But these seem dull and slow to me compared with Roaring Days!
The eyes that watched are dim with age, and souls are weak and slow,
The hearts are dust or hardened now that broke for Cobb and Co.

References used for this blog

6 responses to “Bailed Up by Tom Roberts”