I am currently doing a Master of Arts in Literature and creative writing. I apologise for not contributing regularly during my study times. One thing we have been looking at is Automatic writing, or stream of consciousness writing. That is writing without thought and letting what comes out come. I start with a particular theme and see where it takes me. This particular one  have done is called Sleep; primarily because its the other thing that has been occupying my time with my ill health.

So I hope you enjoy this stream of consciousness writing below. Please leave a comment.

Sleep is not the domain of the vertical alone, although for me it used to be. Now hold my eyes open by matchsticks. Lit ones, which will shine light into the dark places and force me to see. I sleep talking, I sleep walking and sitting, even driving. I am tired, of life, of rules and reason. I want to be unreasonable. I want to go against the rules. Risky behavior I welcome you. Let me step off the cliff into the abyss, blindfolded one foot in front of another. I no longer trust those who have gone before, who say they know the way. We all walk blindly forward, not knowing what is to come. Blind faith doesn’t work. The future is unknown, so let me sleep while it comes towards us or we walk towards it. We can dream of what is to come, but dreams don’t often reflect real life. Therefore, we go blindly into the future. We can plan, plan, plan but we are all subject to the dreams and plans of others, we are subject to nature. Who knows when the sign “Falling rocks do not stop” becomes a prophecy, or the prophecy becomes truth. A car is squashed, we spread over the road someone must use a broom, a hose to clean up the mess. They did not foresee it, we did not foresee it, nobody dreamt it but it happened, and happens and will happen. Warnings get old. Yeah yeah sure sure, its not going to happen. Then it does, and people are surprised even though it was told before. Nobody says “I told you so” but they get on and clean up the mess.

Walk on blindly. Do not reach your hands out, darkness is darkness, you can’t feel it, can’t feel the danger in front of your eyes in the darkness. Welcome darkness as it comes, or as you go into it. Don’t walk backwards, the past is no longer there and you will fall off the cliff where time has crumpled that path. The past repeats, but we cannot look at the past and predict the future. Nobody knows the day or the hour does not talk of the future but talks of the present. Nobody knows what day it is or what time it is in the scheme of things. Darkness is coming if it is not here yet. You say you know when things are going to happen. I will get paid on Friday. These are expectations, but I have learnt in the past not to hold to expectations. Life does not always live up to expectations. It often disappoints. Therefore, embrace the darkness. Embrace the unknown. You go into the future blindfolded or walk into the complete darkness. Close your eyes and sleep where you are. Let time and nature wash over you. Wake when you wish to see where you are in that journey. Was expectation fulfilled or did it fulfill its purpose to disappoint, surprise, or do the unexpected. Then close your eyes and sleep again. 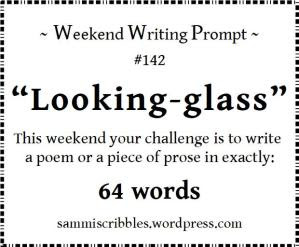 I have written two responses to the above challenge. One dark, deep and sad. The other not so. The second I view as a Victorian young lady, or perhaps I am being influenced by a Clint Eastwood Western I saw yesterday, as a young woman fit to be married, in the early pioneering days of America.

But read as you will. I am just the author and not in control of your imagination. I just steer occasionally.

I spray mirrors around my house with white paint. I avoid going near still bodies of water, plate glass windows, and even keep the sheen on my cookware and cutlery low.  I wear a niqab but I am not Islamic. After my husband attacked me, I wish never to see my deformed ugly face again. I wish this life would hurry and be over. 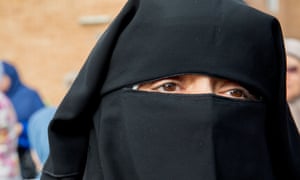 When I looked, I could not see my outward reflection, but how others saw me. Is there a difference? Indeed. Sometimes subtle but nonetheless real. How I wish to be perceived, is not always the same as how I was received. I shall try harder to reflect, not only the light airy self, but the colourful swirls that are my emotions, feelings and thoughts. 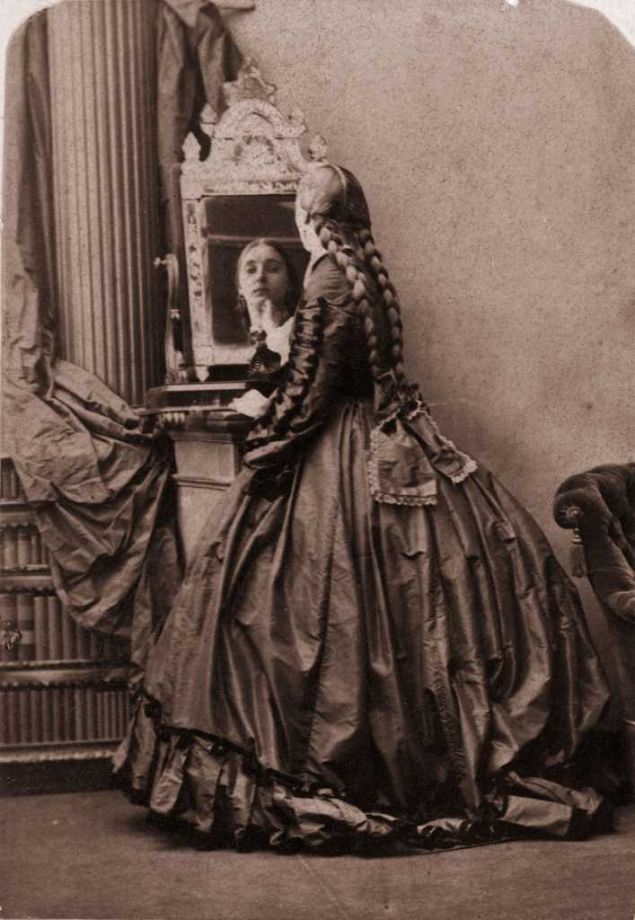 As I lay dying: Faulkner

“the problems of the human heart in conflict with itself … alone can make good writing because only that is worth writing about, worth the agony and the sweat” ?

As I lay dying, wracked in pain  upon my bed, I wonder who I can give my advise to. I have no heirs, no pupils who hang on my every word. Is wisdom, My Wisdom to die with me?

I am guessing that those who catalog, those archaeologists in the future, will dig down deep into our version of the present, might not, i hope not, just record my ramblings but read what is written and say as we do of Plato, or Blake… “How Profound”.

Has my ego got the better of me in my disease of age? I think not. I think we all desire to leave a legacy. We all desire to be remembered and thought well of. We all desire that someone will use the wisdom that we have discovered, unearthed, perhaps uncovered in dusty books in a dark damp cave of a library.

Some writers, as Faulkner has said, concentrate on matters of the heart, Love is illogical. If you ask someone why they love a person, true love can give no answer, as it is illogical. “the human heart is in conflict with itself”, it knows not which way to go. it has no logic. The heart needs to work in tandem with the head. One beats while the brain thinks. Logic itself, or love itself are somewhat useless. One must use both.

Do what you will with my body. Although I do wish you inter and bury me quickly. I have tried not to cause offence when living. I wish to cause no offence (by my smell) when dead.  I do not wish to cause trouble to those who must dispose of my body. Throw it to the fishes. Let the sharks feast on me instead of one still living. Give my body, complete with brain and heart to science, so they may study, and see how the three are connected.

When everything else is stripped away, these three remain… faith, hope and love. When a person is on the way to the heaven he has faith in, then there is no need of hope, as the head has made him confident of where he is going. Faith is the head and heart working in tandem. The heart loves with an illogical love, the head says that it is the only thing to do..love, and believe. So the greatest of these is love.

Mark Twain: The Somber Side

In our American Literature class, we have looked at Mark Twain as a person who can write from Experience and from the heart. He is able to sympathise and identify with the common man. Mark Twain had a family, which is not often written about.

Samuel Clemens (Mark Twain) married Olivia Langdon in 1870. ‘Lily’ as she was known was a constant companion for her husband, accompanying him on lecture and book publishing tours. Lily often edited Twain’s work, sometimes somewhat critically.

The couple had 4 children, and while each gave them joy, they also brought heartache. None were without their troubles.

Langdon Clemens was the first born of the Clemens children. He was the only son. Langdon was born premature in 1870. It was a hard pregnancy for Olivia when she contracted Typhoid fever. While Mark Twain was busy writing witty stories and columns, he spent a lot of his time nursing both Olivia and Langdon. Olivia’s father Jervis died that same year. Langdon got a cold on one of the journeys in April 1871 and died after it developed into diphtheria. He died in 1872 aged just 19 months. Twain blamed himself for his son’s death.

Second born was Olivia Susan Clemens. Suzy was born in March 1872. She was a happy playful girl who at times became very deep in thought when trying to understand aspects of life and its struggles. While the family was overseas and Suzy at college, she contracted Meningitis and died at age 24.

This is the headstone of Suzy’s grave which is in the Clemens plot in Elmira New York, Composer Dan Forrest was searching for some lyrics to go with a song which he had written for a little girl’s funeral. He found this epitaph in the graveyard close to his home. Dan wrote Good Night Dear Heart from the words of Mark Twain.

Clara was the third of the Clemen’s children. She was born in 1874 and spent most of her early years being home-schooled as she travelled with her father. Clara was sent to boarding school in Berlin for later schooling. The whole family moved to Austria in 1896 so that Clara could study piano. Following her mother’s death in 1905 Clara had a nervous breakdown. in 1909, she married the Russian composer Ossip Gabrilowitsch. Her father died not long after that and Twain did not get to see his only grandchild, Nina who was born not long after. Clara was the only one of the Clemens children to live a long life, and she died aged 88 in 1962.

Jane (or Jean as she was nicknamed) Clemens was born in 1880. When 18 years old, she developed Epilepsy. Twain said of Jean, “There was never a kinder heart than Jean’s”. During her childhood, she gave most of her allowance to charities and had a heart for animals. Jean began two charities for the protection of animals and because of this love, her father had bought her a farm. Jean’s epilepsy was severe at times, causing her to have spells in sanatoriums for her recovery. She was never alone, and a trusted maid accompanied her on shopping trips and helped Jean with her daily needs. On Christmas Day 1909, she had a fit while in the bath and was drowned.

Twain was heartbroken. “She was all I had left, except Clara, who married Mr. Gabrilowitsch lately, and has just arrived in Europe.” Twain said to gathered journalists on the morning of her death. “My daughter was trimming the tree yesterday and I was helping her,” he said. “She was so anxious that the lads and lassies of the neighborhood should have a tree, so we brought this one in and began to trim it for them. Tomorrow there were to have trooped in to see the tree and to get presents from it”.

A life full of sorrow and grief. Mark Twain died just 4 months later, in April 1910 of a heart attack in Redding Connecticut. He was buried alongside the others in the family who had passed before in the family plot in Elmira. 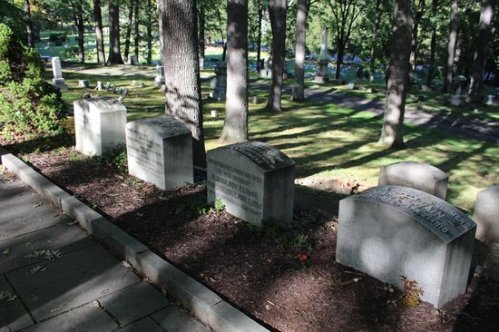 Apologies with some of the typesetting. I bet Twain never had these problems.

Some of the websites visited: