The speech written and made by Charlie Chaplin in The Great Dictator, is an incredibly insightful speech that was relevant then, and is relevant today.

Isn’t this so true. Those who have, want more, while those who have not only desire enough. It is because of this greed that men want to possess other lands. Wars are started because countries want the resources that another country possesses, and it doesn’t want to pay a fair price for it.

“In this world there is room for everyone, and this good earth can provide for everyone”. CC

in a similar train of thought; Mahatma Gandhi said “The world provides enough to satisfy every man’s need not every man’s greed”.

“…has barricaded the world with hate…” CC.  Is it greed that is now the catalyst for war, or is it hate? Hate that has been stirred in the hearts of religious people by fanatics and extremists.

It is greed that keeps up from accepting so many asylum seekers and allows them to be locked up in detention centres. We want to keep our way of life, with its abundance while we turn our backs on the persecuted, hungry and pleading people. We in Australia complain about our 2000 people arriving by boat every year, while Italy received over 2000 people by boat today! IN ONE DAY!

We do need to stop the bloodshed in Syria at the hands of the extremist group who is taking over land and driving peace loving people out. We need to be in alliance with countries who want to return the homeland to the people who have been exiled from it by these war loving, hate filled blood thirsty people.

There is talk now of Australia joining with USA and others in a legal airstrike against the forces of evil. As long as the motivations of the alliance are pure, I have to agree with such a move.

“Soldiers, don’t fight for slavery, fight for liberty… let us fight for a new world, a decent world… to do away with hate and intolerance. Let us fight for a world of reason… where science and progress will lead to all men’s happiness… in the name of democracy, let us all unite!” CC 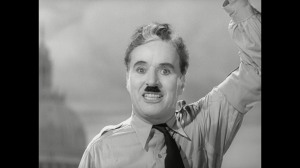 What a powerful and motivating speech. It needs to be played in parliaments around the world every couple of years just to make sure we are on track, united for the common good of the whole world.