Walter Ralegh said the world is a Liar. 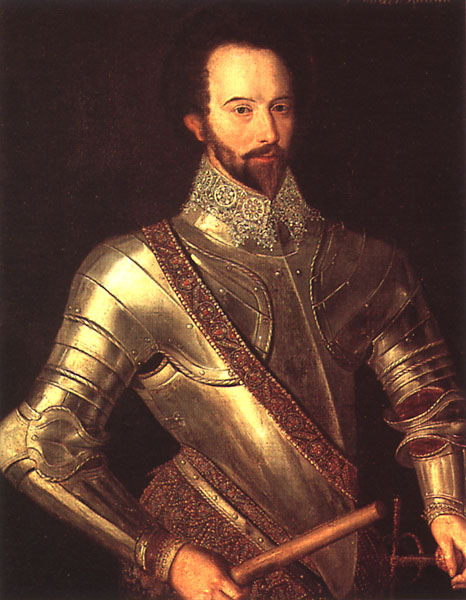 Walter Ralegh was not a suitor of the Queen, however she fancied him.  He flirted and presented the Queen with gifts from his explorations, and trophies from his wins in battles. Walter and Elizabeth Throckmorton had found that they were with child and decided to marry. The Queen who was jealous for Ralegh and disappointed at her servant Bess, through them both in the tower for not asking her permission to marry. The first child, a son named Damerei, dies early in life. Subsequently there were  two other sons Walter and Carew. Walter died in a battle, but Carew led a full life before being killed and buried with his father in 1666.

Walter Ralegh served in Parliment as well. The Queen was somewhat moody. At one time, she knights him and asks for him to be Captain of the Yeoman of the Guard (the head honcho bodyguard). At other times he was out of favour with the Queen and was returned to the Tower of London, then a Royal prison.  He was released a number of times because of his skill in the military and he was needed to lead in battles against the Spaniards.

Sir Walter Ralegh is credited with having bought potatoes and tobacco to England, products which he found on his explorations of  South America. With hindsight, one can look back and ask if he did a favour to the ‘ civilised world’ by introducing Tobacco, but the potato became a staple in the British diet.

Ralegh was sent to the tower in 1603 by James I for an alleged plot against the Throne. He stayed there until he was pardoned in 1617 when he went again to South America. He attacked a Spanish outpost when out there. James I was friends with the Spanish. The Spanish ambassador was upset by the hostilities and asked James to have Ralegh beheaded. He complied with the request, to keep the peace.

What is the central complaint that underlines Ralegh’s poem “The Lie”?

Walter Ralegh had an epiphany in the tower, as he awaited his head to be separated from his body. He figured that there is no real pleasure, no good in the world. If there are moments of pleasure or good, they, or the ones who administer it,  have hidden agendas. Every smile is painted over a smirk, every tickle has darker intentions.

Walter wrote many poems in the Tower. The Lie being one of them.

The Lie tells of discoveries that Walter made that are perhaps not documented elsewhere. It explores and discovers the truth about the world and those in it. To Walter, the affections and admiration of those close to him, save perhaps his sons and wife, were all false. The favours people were showing him were conditional. Conditional on his allegiance and devotion to a religion, a monarch or a cause.

To the court and the church, the poem is saying that while you look good, underneath, your foundations are rotting. The foundation of the court was the history on which it stood, but the reports of historians were all lies, biased in favour of the monarch who was ruling at the time. The church itself was not so much a place of relief and solace, but one in which political decisions were made. The church at the time espoused a virtuous existence where in fact they were a puppet of the politicians.

The poem continues in the third verse, to tell the Kings and Queens not to be fooled when some says they love you. They love you only so far as it can fair them well. It is not a love or a loyalty that can be relied upon. It is merely a fair weather love. The Monarchs say they are serving their people, they want nothing for themselves. Ralegh says that is a lie. This was shown when Ralegh was castigated for attacking a Spanish ship, but was forgiven it when it showed to be a bounty for the monarch.

The poem continues in its revelations. Everything is a lie. With this discovery, he finds he has no reason to fight any longer. He has resigned himself that he is going to die.

The final verse tells the world to kill him then. The body may die but you cannot kill the soul.

Go, Soul, the body’s guest,
Upon a thankless errand;
Fear not to touch the best;
The truth shall be thy warrant:
Go, since I needs must die,
And give the world the lie.

Say to the court, it glows
And shines like rotten wood;
Say to the church, it shows
What’s good, and doth no good:
If church and court reply,
Then give them both the lie.

Tell potentates, they live
Acting by others’ action;
Not loved unless they give,
Not strong but by a faction.
If potentates reply,
Give potentates the lie.

Tell men of high condition,
That manage the estate,
Their purpose is ambition,
Their practice only hate:
And if they once reply,
Then give them all the lie.

Tell them that brave it most,
They beg for more by spending,
Who, in their greatest cost,
Seek nothing but commending.
And if they make reply,
Then give them all the lie.

Tell zeal it wants devotion;
Tell love it is but lust;
Tell time it metes but motion;
Tell flesh it is but dust:
And wish them not reply,
For thou must give the lie.

Tell age it daily wasteth;
Tell honour how it alters;
Tell beauty how she blasteth;
Tell favour how it falters:
And as they shall reply,
Give every one the lie.

Tell wit how much it wrangles
In tickle points of niceness;
Tell wisdom she entangles
Herself in overwiseness:
And when they do reply,
Straight give them both the lie.

Tell physic of her boldness;
Tell skill it is prevention;
Tell charity of coldness;
Tell law it is contention:
And as they do reply,
So give them still the lie.

Tell fortune of her blindness;
Tell nature of decay;
Tell friendship of unkindness;
Tell justice of delay:
And if they will reply,
Then give them all the lie.

Tell faith it’s fled the city;
Tell how the country erreth;
Tell manhood shakes off pity
And virtue least preferreth:
And if they do reply,
Spare not to give the lie.

So when thou hast, as I
Commanded thee, done blabbing–
Although to give the lie
Deserves no less than stabbing–
Stab at thee he that will,
No stab the soul can kill.