I am in awe, and so grateful.

On Friday 31st March 2017, My class and I visited first, the Renaissance rooms at the Art Gallery of NSW and next the Mitchell Library in Macquarie St Sydney to look at the Shakespeare room.

I am so grateful for the people in the library for making all of their resources and providing staff to educate us, not only about Shakespearean Literature but the Architecture of the building.

Looking at the first folio of Shakespeare’s work.

I was totally amazed that each little aspect of the Shakespeare room at the Mitchell Library was painstakingly planned. There is a reason behind the design of every little piece of woodwork, windows, and plaster. I can only imagine the tedious hours of discussion the committee had to have to come up with each aspect. Sometimes we think of meetings as boring and unnecessary. However, we see now the legacy of those meetings in the architecture of the Shakespeare room.

The class in the Shakespeare Room at the Mitchell Library 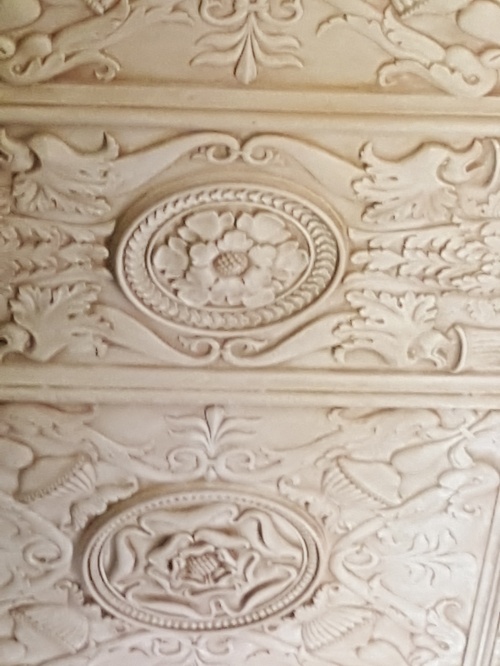 This is a section of the ceiling which depicts the end of the War of the Roses, the Tudor Rose of  Henry VII 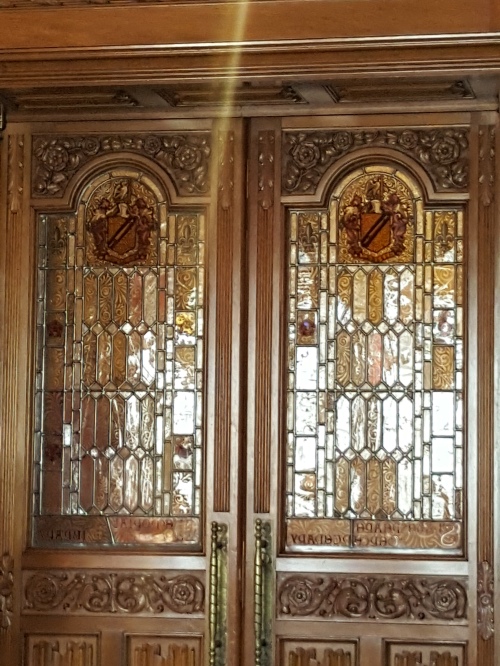 In this picture, we can again see the Tudor Rose in the woodwork. Even the vertical lines in the woodwork have a meaning. These represent drapes. If we think that Shakespeare was renowned as a playwright, then drapes (or curtains) depicted in the woodwork design is quite suitable.

The detail taken in design showed me that when planning this room, and also the collection of the artworks that we saw; the committees overseeing these works were not just thinking of their own time, but were thinking of the generations future who may enjoy such works.

I am extremely grateful for the foresight that these people had.

I wonder if designers today put so much thought into the legacy that they are leaving, rather than just getting something done quickly to appease the people supplying the finances. Iconic buildings today soon loose their usefulness and are torn down to make something bigger, so called better.

I think of Cricket and football stadiums for example. There are areas of the Sydney Cricket Ground, and also Adelaide oval, where tradition has been forgotten and have been rebuilt to fit more people in, chasing for the almighty dollar. Melbourne Cricket Ground has not escaped this. The Notorious Bay 13, which was made very famous by Merv Hughes gym class, no longer stands. Pity.

Today we have corporate sponsors for everything. Recently the Sydney Entertainment Centre, which was renamed QANTAS centre was sold off and torn down to build a new centre. This was an iconic building. As was the Sydney Convention centre at Darling Harbour. This was completed in 1988 but later demolished to make was for a bigger ‘better’ centre.

Function has won out over art and beauty.

Sad but true when the old saying “They just don’t make em like they used to”. The twittering birds learn to fly

Inspired by the Paul Klee work called “The twittering machine” and Leonardo da Vinci’s helicopter and parachute designs; I combined these with a corkscrew and the central mechanism of egg beaters to come up with an imaginary machine designed to teach orphaned birds to fly.
You turn the corkscrew handle which winds the egg beater mechanism until the machine spins slowly and detaches from the tree to float softly to the ground.  The idea is to place the birds on the platform and when it starts spinning, the will be scared and jump off, prompting them to learn how to fly…similar to a mother pushing them from a nest.
Totally fictious and non practical but fun. This is my final work for 2d drawing for this semester.